by The Durian Brothers / Ensemble Skalectrik 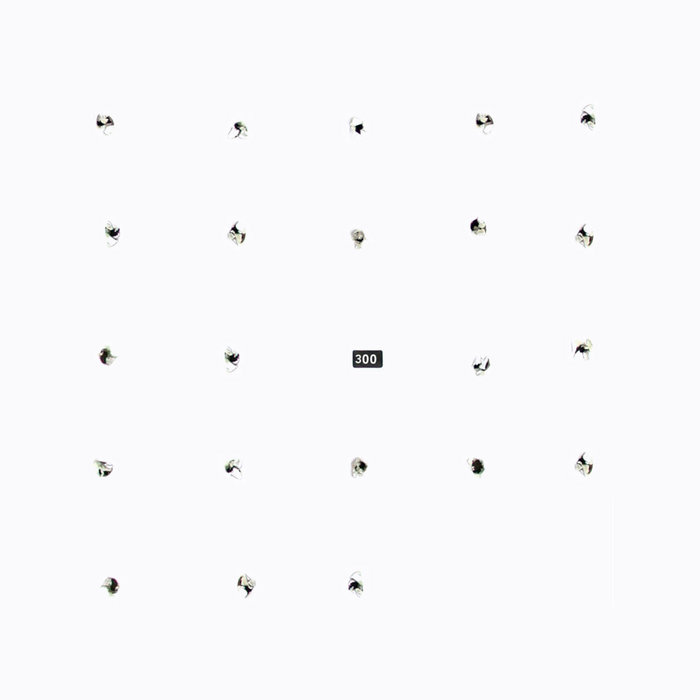 Another top quality, album-length release, the twenty-second issue in FatCat's long-running and highy-acclaimed Split 12" Series features two artists who use the record deck as a focal point of their craft, each approaching it in very different ways and to markedly different effect.

Active since 2009, The Durian Brothers are a trio based in Dusseldorf, Germany whohave remained little known to date, with three vinyl EPs (now being compiled together as an album on FatCat later this year) being self-released (with no promotion) in small editions on their own Diskant label. Their approach to their sound-source is close to that of new labelmate and fellow Dusseldorf resident, Hauschka. In a praxis that mixes structured composition with playful improvisation, one member knits things together with the use of a sequencer, whilst two others each get hands-on with a pair of 'prepared' turntables, alongside mixers and various effects. Completely avoiding the use of records, the machines are instead creatively mis-used in a very experimental approach. Melodies are played on tuned rubber bands stretched across the decks; assorted objects are placed upon the rotating platters to create scrunching rhythms and textures. What results is a radical and fresh take on contemporary club music. Slightly wonky and somehow African in its non-standard feel / tonality, it sounds like little else around right now.

Their three tracks here were recorded in Musikbetriebe studio Dusseldorf in february 2012. All the material was played live with some rearranging and overdubbing added afterwards. The side opens with the shimmering, atmospheric build of 'Staatsqualle', before the more weighty, bustling drive of 'Angstbirne' kicks in - an impressive, compulsive slice of urgent, kinetic energy. Nagging, hypnotic bass loops curl around a rich rhythmic weave that's bristling with detailed debris - scrapes, tics and clicks, micro-blasts of static, piercing tonal skree and subtly tweaked bass modulations - as the track ploughs relentlessly forwards. No less densely textured, the punchy bounce of 'Unterirdisch' increases the musicality with the what sounds like a flash of highlife guitars riding over a bustlling rhythm and a bubbling, watery backing.

Whilst they have one foot in the art camp, The Durian Brothers art is aimed squarely at the dancefloor and at bodily interaction. Where their material is sharply focussed, driven and direct, Ensemble Skalectrik's side is a far woozier and less utilitarian proposition, occupying a more cloudy, veiled, interior space that seems deliciously derailed and disconnected. Bathed in reverb and shifting eq, its murky sound-world cocoons the listener in a delirious fog of warping material - slurred, molten, smeared and blurred, its signals ripple around the listener as though transmitted through some viscous liquid.

Entirely based on spontaneous composition and recorded in one take, Ensemble Skalectrik is a side-project of the prolific Nick 'Ekoplekz' Edwards and represents the most raw, extreme performance-based music in the Bristol-based artist's expanding repertoire. Exploring turntable improvisation in tandem with loops and fx pedals, his is a highly personalized take that incorporates elements of chance, drone, dub, hauntology, musique concrete and free improvisation. Chopped and merged together out of fragments of old vinyl (mainly sound effects and easy listening albums, Stereo test recordings), expanded through a selection of sound-shaping devices (filters, equalizers, loop-pedals), the four home-recorded tracks here are an impressive follow-up to 'Trainwrekz', Ensemble Skalectrik's recent debut album on editions Mego. 'Outer Phase' loops and layers a voice from a stereo test record amongst a flickering miasma of drones, tones, bleeps and bursts of fuzz to form a rippling, melted-out amorphousness.

Following on, 'Pharos Groove' and 'Powertranz' are more explicitly rhythmic - the former a sweet, loping groove of on-off pulse-bursts rolling around the spectrum; the latter a swirling mass of slashed percussive textures with a dirty dub bassline poking through. On both, a rhythmic core is anything but stabilising. It might anchor together a spatial framework but everything here seems built on shifting sand and in danger of collapse. 'Winslow' ends proceedings in a woozy, narcotic sense of suspension - its fuggy valium daze like a disconnected waltz through a haunted ballroom ambience reminiscent of The Caretaker's finest.

As usual, this record will be released on 12" vinyl in the Split Series' trademark hand-drilled and numbered packaging, pressed in a limited edition of 700 copies for the world. It will also be available digitally.